Years of discussions with PPG pilots and sharing ideas with our testers resulted in our new device - MotoMonitor. We have gained priceless experience, and we are sure our latest product meet the demands, and assures best quality of service.

Initial concept of new device arose in autumn 2012. Since then, we have been working secretly on this idea, as we were sure the concept will be revolutionary.

Analyzing numerous ideas, we rejected many concepts due to various reasons. In the end, we got to the point where we can proudly say, that the idea had fully materialized itself. Sectretly pushing the construction process forward, we have been gathering opinions of hundreds of PPG pilots. We needed to understand, what are the expectations. After about 1.500 hours we can show you all our new kid: 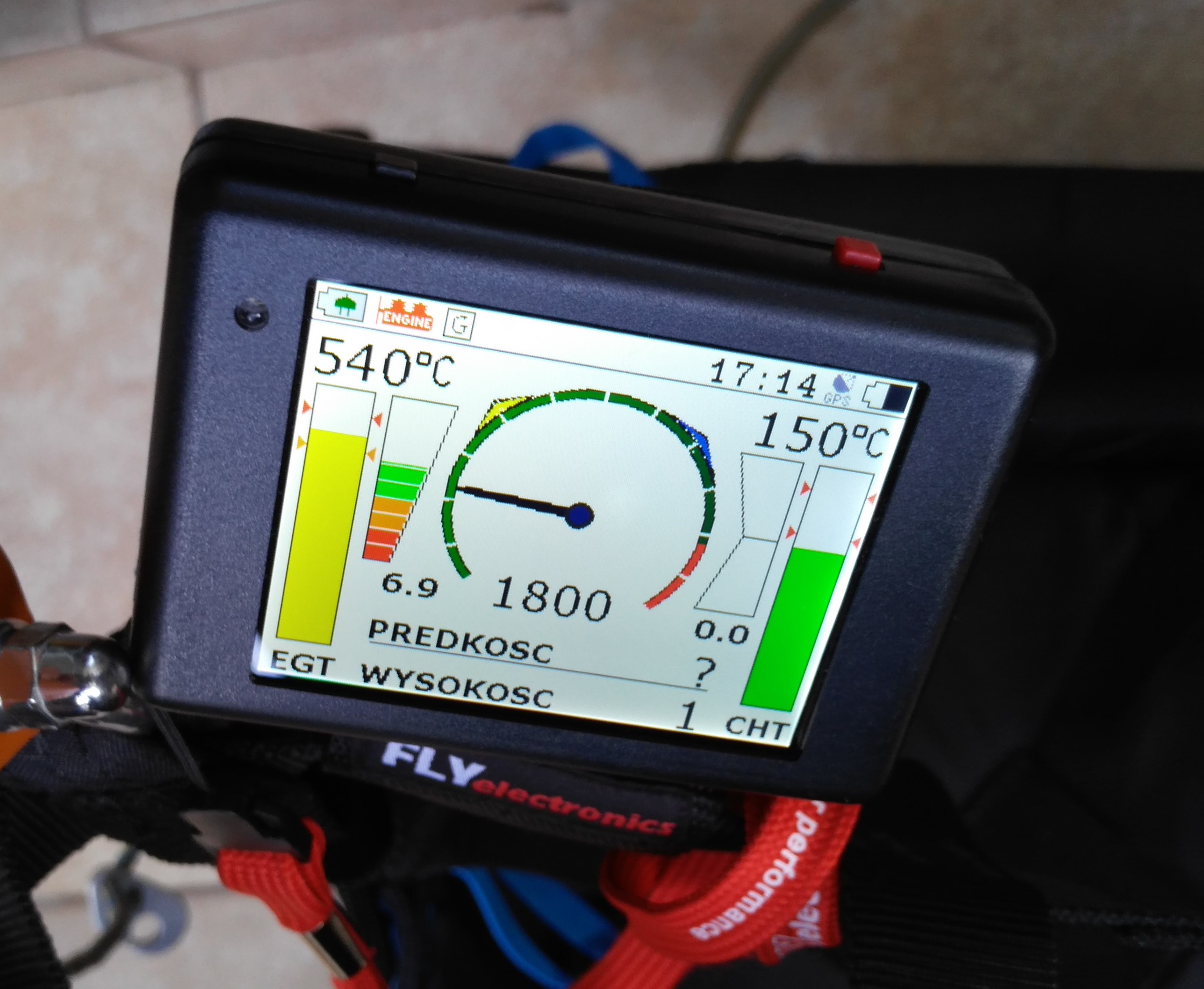 Some photos on this site show device with old firmware - generally more stuff on graphics desktop - means new firmware (site do not keep up to date with firmware development).

One of disadvantages of our previous product was small font. Someone said "Of course it would be great to have a device, that had big screen with customizable font". We decided to take up this challenge and build a device that will be convenient to operate for any pilot.

At the same time, pilots commented that they would not use a computer that is too big. They expected something small and handy, to install it on PPG without problems and "not flying with a TV set attached to the frame. So we designed a device that isn't bigger than a credit card, yet has a big screen which does not disturb the pilot. We called it MotoMonitor.

What you get from us is a device, that can have 50% bigger font and is two times smaller than other computers, available on the market. How was it possible? Well, it's XXI century... Everything is possible!

All things that caused problems in previous versions have been reconsidered and amended. For example - cables. They aren't convenient, can be easily broken - so we had developed wireless tool that does not require any cable-connection. Thanks to that, it is much easier for user to install the device on a PPG - MotoMonitor is also less problematic in daily usage.

It allows not only to measure:

But gives the pilot some extra information:

Do you think it is not much?

Give us some time to develop some more ideas - you will see the power hidden in this concept!

Please see below detailed description of our new device:

As mentioned earlier, we are giving you complete and tested product, which also means you can see the result of thousands work-hours of our team.

After gathering your opinions and priceless experience, we decided to release new device. One of main sources of problems for us and for clients, and at the same time source of costs, were all sort of cables and wires. Unfortunately, those little things costs many working hours of a manufacturer, who has to construct and test each one. At the same time, even when tested properly, cable can cause lots of trouble for clients - it tends to get broken, connection can get lost due to broken wire...

So, we asked ourselves - what can we do with that issue? We have to eliminate the cables and develop wireless device! It caused a need to separate measuring tool and display - but thanks to optimalization, we managed to decrease other production costs.

Idea turned out as a jackpot. In few months, we built PoC (Proof of Concept), and then technological solution, applied in the final version of MotoMonitor.

Another element we decided to improve was the screen. Pilots reviewing our previous device - PPGinfo, often claimed font was smaller than in other measuring devices available on the market, what caused serious issues for pilots with poor sight. However, other products were too big to be comfortably installed on PPG frame. We needed to find a golden mean... Create a device that will be small and handy, yet readable in extreme conditions during a flight.

We have been testing lots of display screens and small, robust cases. Finally, we implemented 3 inches screen and applied default font 8x5mm (PPGinfo had default font 4x3mm!). It is not the end - if you need, font can be enlarged up to 40x20mm!

Still not enough? We agree!

While projecting the device we kept asking ourselves one question - what do we (the pilots) need while flying? What else can we offer to ease the life up in the air?

The idea struck one of us by an accident, during a flight in spring 2013. Why don't we show pilot current speed, altitude, distance from start etc. Idea was great, and it turned out to be possible to implement. So, we decided to add those facts to the device.

During one of brainstorming sessions we asked again - what else can we give you? One of our colleagues said - "It would be cool to see direction and speed of wind... That could make landing easier!". First thought was critical "yeah, right... What else?", but then someone realised - it is possible!

Our team works on couple of projects, and as we know, synergy is key. So we built idea of Połączone Systemy Rozproszone (PSR®). Thanks to this, MotoMonitor can be connected with our other products, for example MeteoStation - that shows (among others) direction and speed of wind, mentioned before.

That was the end of drawing a concept of MotoMonitor.

Separating transmitter and receiver gave us one more possibility - currently, transmitter can work as separate device. Thanks to this, manufacturer can install transmitter onto his PPG by default. How does it help the manufacturer, and how would it benefit the pilot?

Benefits for a pilot:

PPG fitted with MotoMonitor transmitter by default will be labeled by manufacturer with below sign:

Use of wireless connection, apart from obvious advantages (mobility, less failure) causes question - how would a couple of MotoMonitor work, when placed close to each other? We would like to assure our clients, that wireless connection in each device is secured with an unique address and tailored code. It's range is about 5 meters, and each user can set up different canal (one of 32 possible). Each device has unique 4bytes MAC address, and communication between transmitter and receiver lasts fraction of second. Thanks to this solution, in an area of 25 square meters, there is a theoretical possibility to turn thousands of MotoMonitors in one moment (theoretically there is 35 billions of combinations of addresses and frequencies).

There are three text desktops, each of them showing up to 6 fields from below set:

Sample desktop (user can define, which parameters are shown on screen):

Additionally, on graphic desktop user can see below facts: 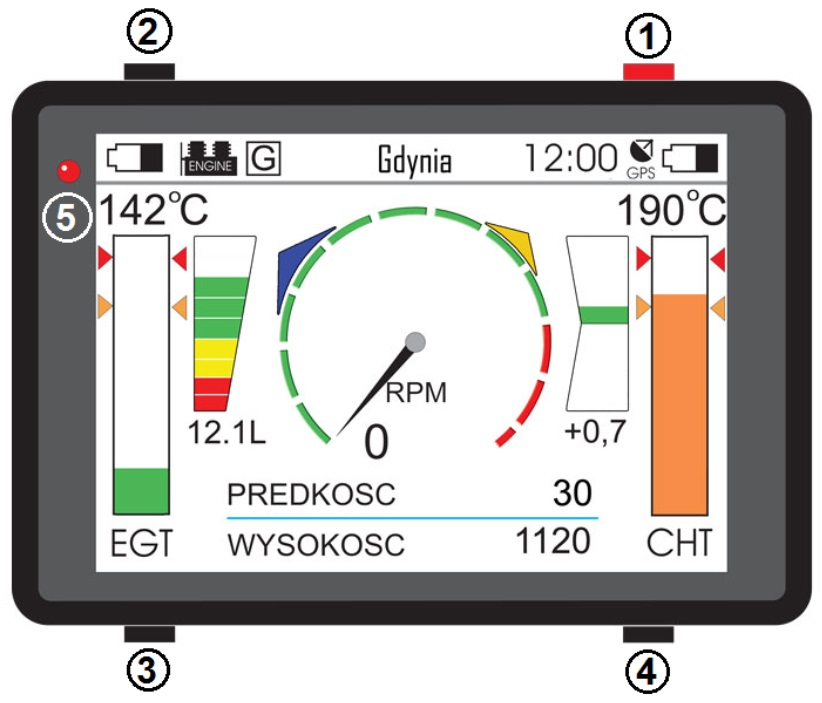 Our previous device was able to record last 20 flights. In MotoMonitor, we decided to improve this functionality as well! We have widen the amount of flights recorded by the logbook, and add more data to be stored in it. We have added start point and wing name to the database, and sample effects you can see below (in different colour schemes):

The inspiration came from classic, paper logbooks - but they appear useless now!

Pilot can define his favourite starting points inside the logbook. How? User can define up to 25 positions of start points coordinates with names to the device's memory. When MotoMonitor detects, that start happens on predefined position - it will put it's name in the book, Otherwise - when we start from new place and/or don't want to have it stored in the memory, device will flag the flight with start point coordinates (as per above screenshot). In seldom cases (e.g. when we start PPG in underground parking etc.) device will be unable to detect position and logbook will be updated with Start Point - unknown.

One of our future plans is possibility to download logbook to PC memory.

MotoMonitor screen can be tailored to fulfill the requirements of different users. Taking into account fact, that not all the users likes to play with the tool and it's setup, MotoMonitor is preconfigured and will work on default, optimum settings once launched.

In order to adapt the device to particular PPG motor, user should enter three parameters:

We are just people (filled with passion and devotion for work), but as anyone else on the planet, we commit mistakes. There is a possibility, that somewhere deep inside the code, there is a bug that neither we nor the testers found. We developed special webpage for those of you, who would encounter such issue:

In above webpage you can raise any issue, report a bug or suggest an improvement for our device. You can check the status of your issue and back up issues raised by other users. The more users report an issue, the quicker it gets resolved!

For the most active error seekers we prepared valuable prizes!

How to upgrade firmware on Reciever ? (Turn on the subtitle)